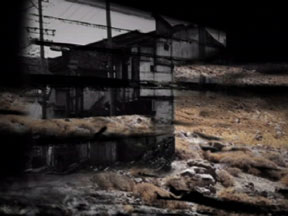 Coming back from the States, I was very sad to learn that filmmaker Jan Suschitzky had passed away. In 2007  I met Jan Suschitzky at the Dutch Film Festival. I was very impressed with his film “The House” (with original music from Neil Thornock, I made a new soundtrack to it that can be seen here, with my duo Wrikken). Jan discovered himself as filmmaker at a later point in his life. He had a unique, intuitive way of working, his films were animation-like, build up from a lot of pictures that he collected. We had been working on several films together, we submitted “Droom van de Bosgeest” to the Cinedans program, which I hope is selected. The film, which can be seen here, features dancer Kay Patru. Here is a small preview of our latest project which I don’t think was entirely finished, working title “De Stad”. It was great having met Jan and very inspiring working with him. Dream on Jan!